When beginning a project, the first thing to ask yourself is always, “Am I using the right tool for the job?” This question can be difficult to answer yourself when there are so many options. 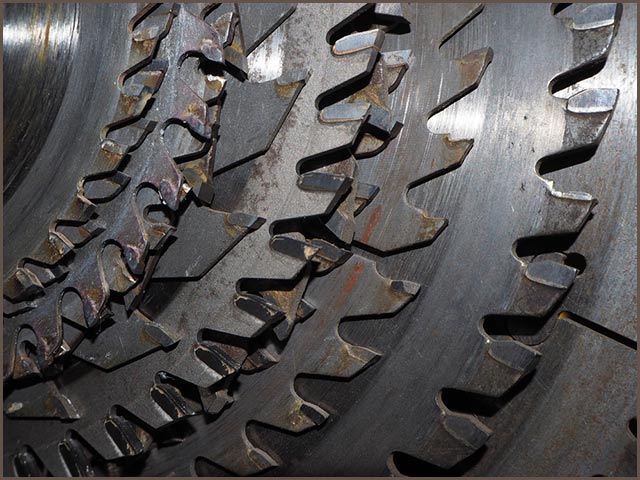 Occasionally called combination saws, a general purpose saw blade is relatively self-explanatory. This type of blade is good for cutting just about any material, but not as well as specialized blades can. The blade doesn’t do cross-cutting or ripping quite as well as other blades but works well for occasional use.

If you’re not using the table saw regularly, such as for a profession or for a personal project, this blade works well. Compared to crosscutting blades and ripping blades, they’ll usually have a middling amount of teeth. 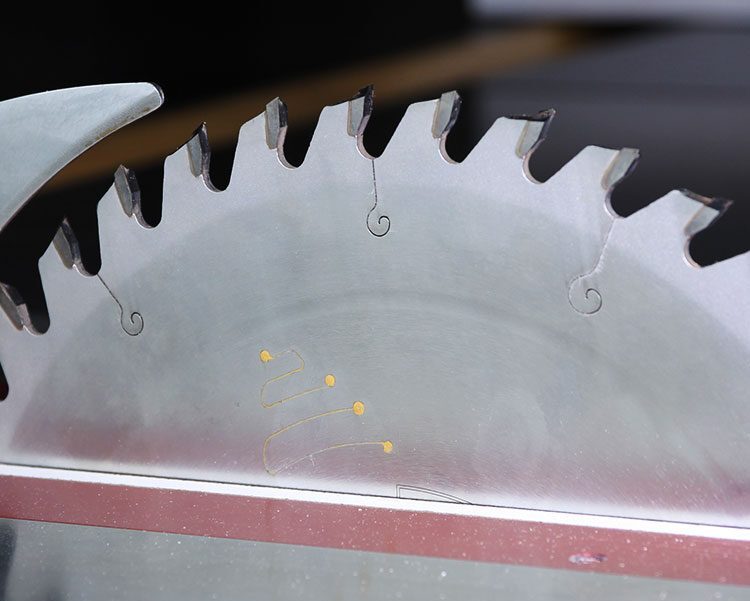 General purpose saw blades are best for, as the name implies, general use. Their jack-of-all-trades style of functionality makes them useful for all table saw jobs. While not as useful at cutting quickly or cleanly, combination saw blades are good for every man who doesn’t want to change their saw blade for different cuts or doesn’t use a table saw often.

It can also be good for craftsmen who are looking for consistency. The general purpose blades are very consistent in their work and very easy to use.

A ripping saw blade is a type of blade designed for quick, coarse cuts. These blades are characterized by few and wide teeth. These teeth “rip” through the wood along the grain, creating cuts that leave the wood rough and coarse at the edges of the cut.

The biggest advantage of these blades is their sheer speed, which allows them to cut through large pieces of wood in significantly less time than others. The blade takes bigger bites of the wood than other blades and the gaps between the teeth allow the chips to exit easier. 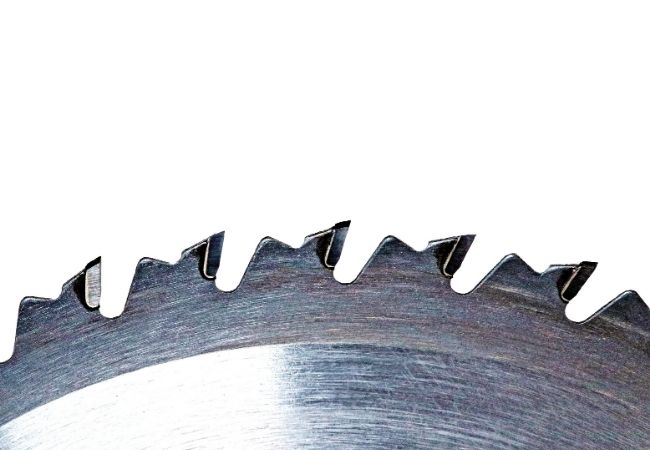 These blades are best suited for working with large pieces of lumber. These blades cut with less resistance due to following the grain of the wood. Initial cuts are generally made with a ripping blade.

Crosscut blades produce extremely fine cuts across the grain of lumber. They’re not meant to cut boards lengthwise, as their teeth would cause burns due to the friction.

The ripping blade, dado set, and crosscut blade are all named for the type of cut they were intended to perform. The eponymous crosscut is awidth-wise cut across a piece of wood. Crosscut blades can also be used to cut veneered plywood sans splintering.

For regularly visible edges, such as the outer edge of a shelf or staircase, a crosscut blade will fit perfectly due to the smooth cutting. The highest quality crosscut blades will even imbue the wood with a polished appearance.

When ripping a piece of lumber, you may find the distinctive small grooves of the typical ripping blade undesirable. If you’d like another option, the flat-tooth ripping blade is the solution, offering the same capabilities of the standard, without leaving behind grooves.

Flat-tooth ripping blades do not possess the same angular teeth as standard ripping blades. This makes them significantly more capable of producing clean cuts without reducing the effectiveness of the blade. 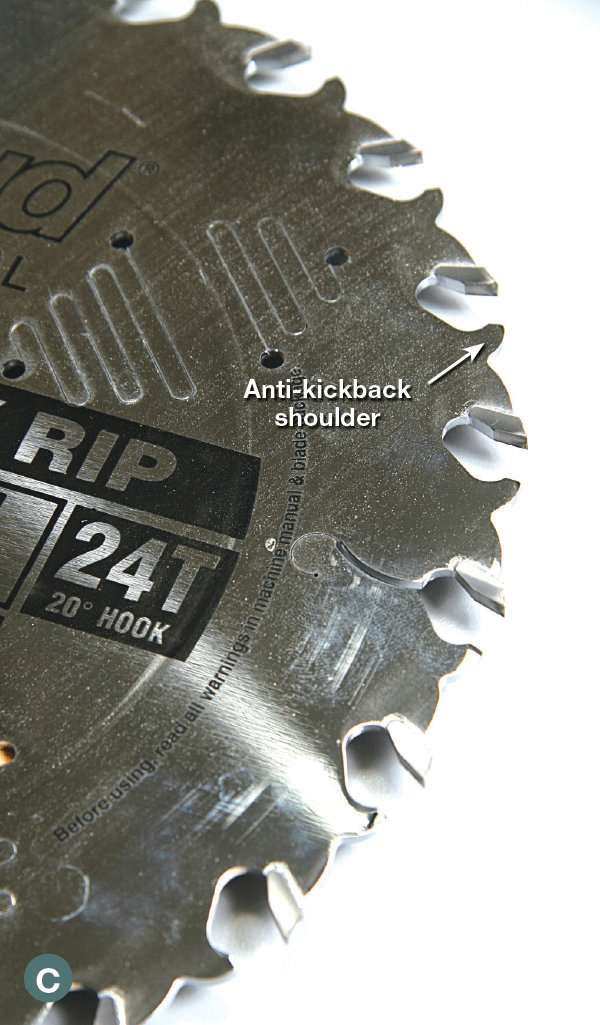 Much like standard ripping blades, flat-tooth blades are best used for cutting along the grain of the wood. However, unlike their counterparts, which produce grooves due to the kerf of the saw blade, flat-top teeth produce a squared cut which may be somewhat rougher than a regular ripping blade but easier to work with. 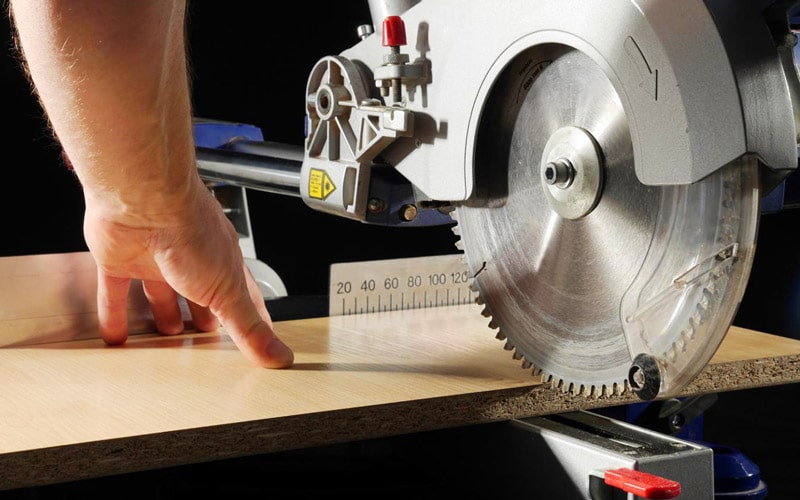 When cutting into non-standard pieces of wood, such as plywood or any wood made of scrap wood pieces, a special blade is needed that doesn’t cause wood to chip.

The primary difference between the two is that it functions as a combination blade. The blade is designed to do both crosscutting and ripping on man-made materials such as plywood, MDF, and others.

The composite saw blade is made specifically for cutting into man-made materials that other saw blades would tear chunks out of and render unusable. These include most types of plywood, MDF, and anything of similar softness. Alongside this, the blades are exceptional at cutting precisely into these materials.

For this reason, it’s exceptional at cutting materials for basic furniture, home maintenance, or DIY building. For example, replacing your floors with plywood is much easier to do when using a composite blade to make small, precise cuts.

Unlike typical saw blades, a dado set is designed with carving in mind rather than cutting. Dado sets cut a specific type of slot into the wood, called a dado when going against the grain.

When going with the grain, it cuts a groove. They come in two primary varieties: dado stacks and wobble blades. 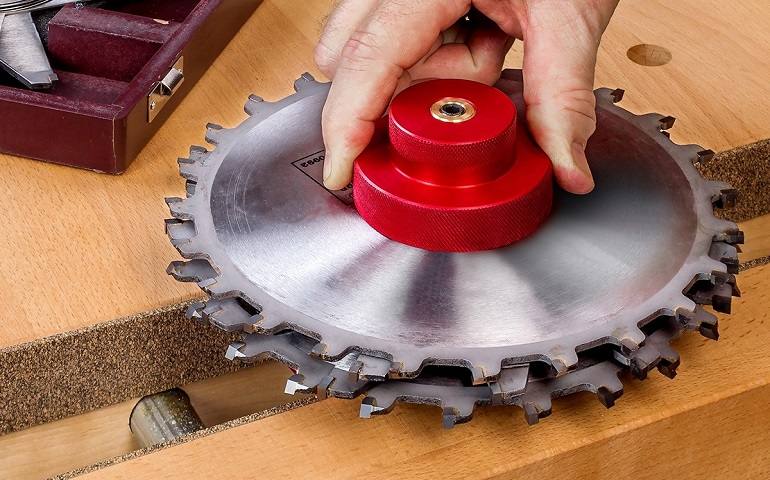 A stacked dado set consists of two circular saw blades fixed on either side of a set of removable chippers. As it spins, the outer blades cut the walls while the chippers carve away waste material. A wobble blade is mounted on an adjustable hub that changes the angle of the circular blade to achieve similar goals.

Dado sets are explicitly designed for cutting dados and grooves into lumber. This makes them a very specialized tool designed for use in complex builds such as shelving, notched pieces, and anything that requires two pieces to interlock together before fastening.

When control is paramount, a dado set is required due to the sheer adjustability of the setup. Stacked dado can add or remove blades to alter the dado cut while a wobble blade’s angle can be altered. 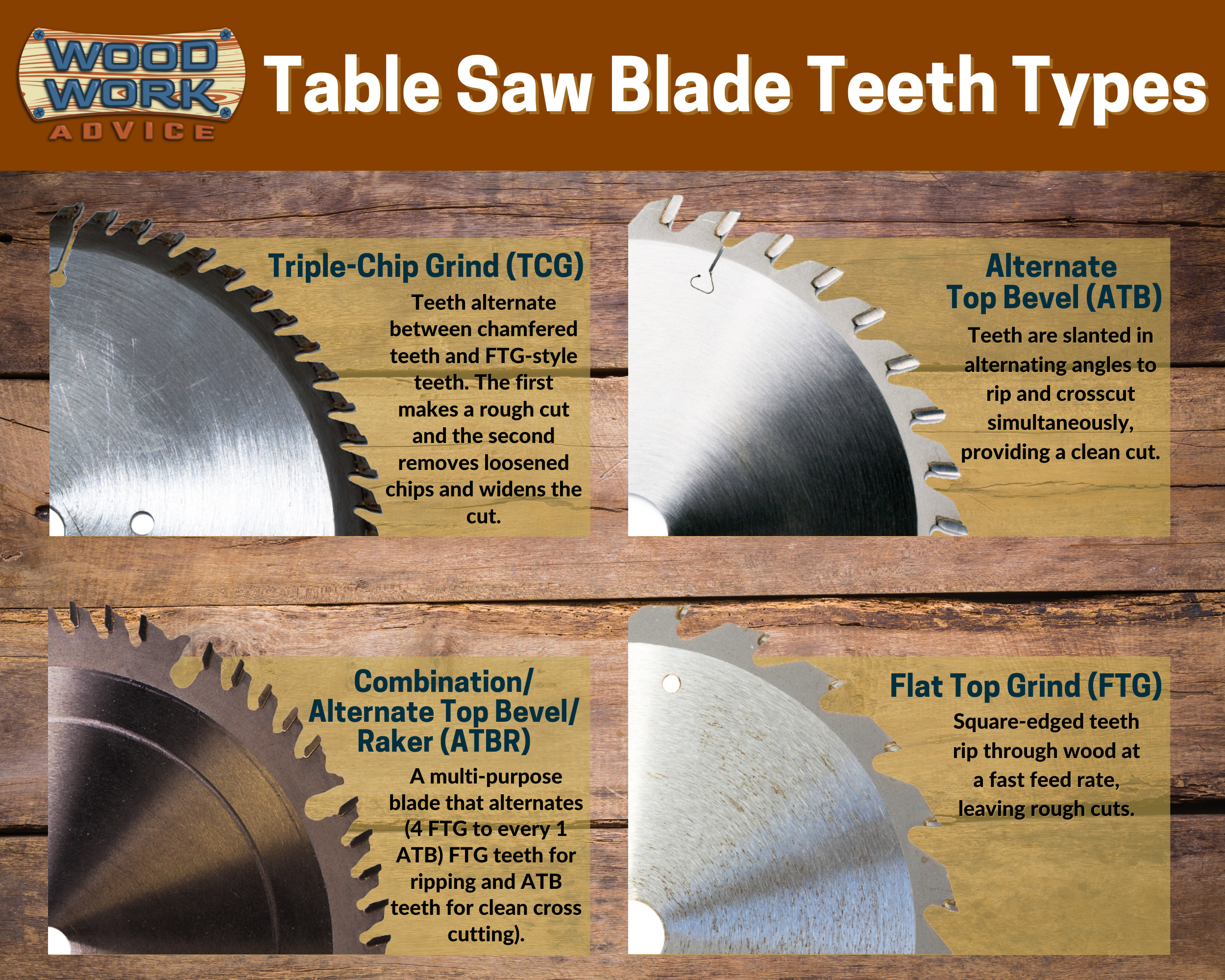 FTG blades have square-tipped teeth that are also called rakers. These teeth cut and chip at the wood much like a chisel and hammer. They’re fast-cutting and durable, but don’t produce a clean surface. They’re designed for ripping blades and will most commonly be found on them.

The teeth on ATB blades are angled across the top edge and serve general purposes. The mirroring shape of the tooth, where they alternate directions, causes it to shear the wood fibers cleanly using a slicing motion. The steeper the bevel angle, the cleaner the cut, but the quicker they dull.

Combination blades have a mixture of the ripping abilities of FTG teeth and the cross-cutting potential of ATB teeth. These teeth are arranged in sets of five, consisting of four ATB teeth and a raker, FTG, a tooth that makes them good for all-purposes though less useful than either set.

TCG teeth on blades are effectively the same as an FTG, but with a single difference: chamfering. The teeth on a TCG blade alternate between a chamfered tooth that roughs out the cut and an FTG tooth that cleans it up. This allows the saw to cut into much denser materials such as laminate, corian-like, or even some metals.

Factors to Consider When Choosing a Table Saw Blade

There are some things you should keep in mind when choosing which blades you need.

The project decides the materials, the tools, and the time needed for it to reach completion barring unforeseen circumstances. Because of this, you may want a single, versatile saw blade that can cover all bases well, such as a general purpose blade. On the other hand, you may need one or more specific blades to achieve the best possible results.

A project may need to be of professional quality if made for a client or meant to last a long time. DIY personal projects can make do with basic quality while professional-grade will need significantly more effort on the saw’s part, and yours by proxy. 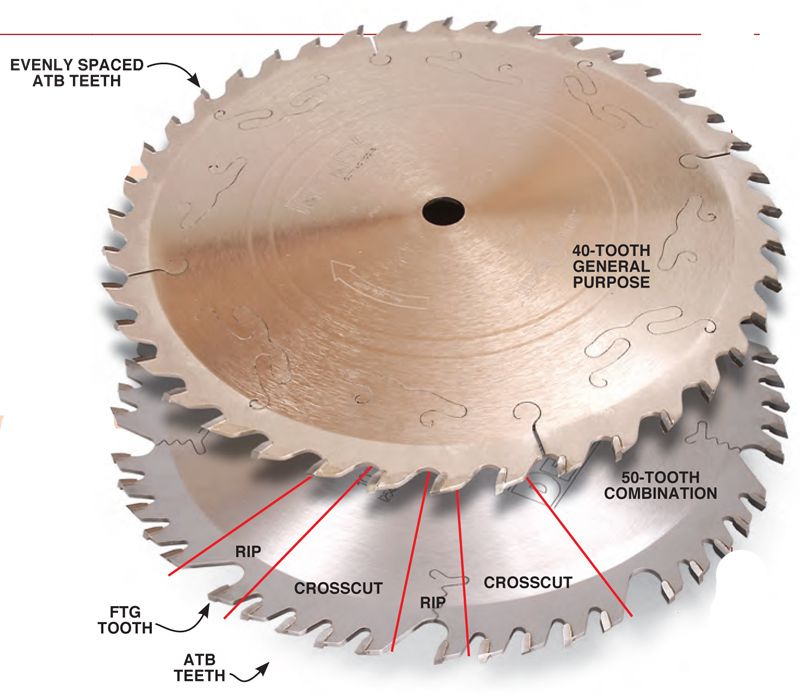 As stated already, the raw material can determine what type of blade you need to use. While a general purpose blade can get the job done for lumber, man-made materials that are keen on splintering require a more delicate touch such as that of a composite blade.

Larger scale materials will require a more active role from the saw; in this case, a ripping blade will make the cuts easier, quicker, and cleaner than the general purpose. There’s no such thing as a perfect blade for every situation.

A general purpose saw blade can make almost any cut in the hands of a skilled craftsman. However, using the intended tool for the intended job will always give you a greater chance at perfection. This means using ripping blades for ripping wood, crosscut blades for crosscutting, and so on. 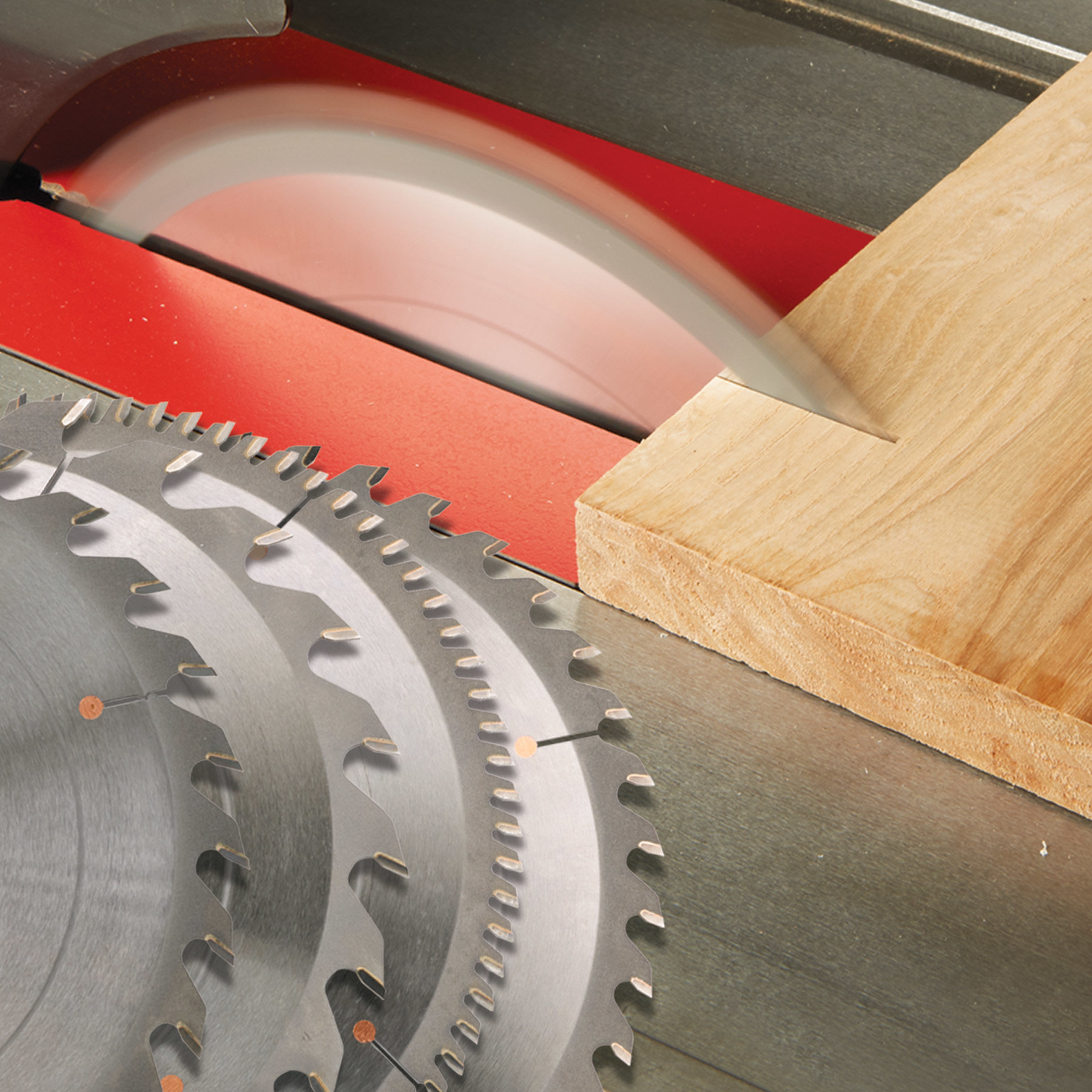 Alongside this, the type of cuts you want to make will determine your blade size. Larger blades make larger cuts, but less precise than smaller blades making smaller cuts.

Aesthetics of the Cut

If you want your cuts to be visibly attractive and smooth to the touch, you’ll need to pick a saw blade specifically for that purpose: in this case, a particularly fine-toothed crosscut blade capable of producing a polished finish to its cut. However, if you want to have a rough texture or woodsy appearance, then a general purpose blade is better as it provides a middle ground between them.

What Does Kerf Mean?

The kerf is the slot that a blade cuts into the wood. This means the general shape of the cut and thus how easy it was made. Certain types of kerf are better at certain jobs, such as a squared kerf being good at ripping along the grain.

Which Blade Type is Best for Metal?

Depending on the type of metal you wish to cut using a table saw, the blade type will change. A crosscut blade can cut soft, non-ferrous metals such as aluminum, lead, copper, tin, zinc, and brass. For hard metals such as steel and iron, you will require a specialized metal-cutting blade.

How Many Types of Table Saw Blades Should You Keep on Hand?

Depending on the amount of use you get out of a table saw, you can need anywhere from a single general purpose blade to multiple of each type of specialized-use blade. It depends on the jobs you usually do, and how often you do them. If you cut a lot of material daily, then the additional types will be useful.