Benchtop buffers can make your life easier in a number of ways. Are you sick of working with a rusted and/or stained knife? A benchtop buffer can fix that.

Do you want to polish up a finished woodworking project that it still quite rough? A benchtop buffer can do that for you. Read on to learn more about these awesome tools.c

At a Glance: Our Top Picks for Benchtop Buffer

Comparison of the Best Benchtop Buffers

What is a Benchtop Buffer and What is it Used For?

A benchtop buffer is used for a range of different tasks. Mostly, buffers are designed to polish rough surfaces on a variety of different objects.

Smaller buffers can even be used for polishing jewelry, while larger buffers are great at getting rid of metal stains and even finishing rough wood surfaces when you are done with your woodworking project.

Benchtop buffers go right on top of your work bench and are particularly handy for larger items, depending on the clearance, or space, between the buffing wheels and the motor.

Key Features to Look For in Each Model

When trying to find a great benchtop buffer, there are several crucial qualities you should keep an eye out for. Here are the most important ones:

You are going to be using this buffer to polish a wide variety of different objects, and some of those objects are likely going to be on the smaller side or objects with a lot of sentimental value, such as jewelry. The last thing you want is a buffer that is going to rock back and forth or vibrate a ton when you are doing this very fine work.

This quality really depends on what you are trying to do with your buffer. If you plan on working only with more compact items, the clearance area between the wheels and the motor is not particularly important. But if you want to be able to polish larger items, you need a larger clearance area.

Review of the Best Benchtop Buffers

Now that you know more about buffers and what to look out for, here are some of the most impressive products: 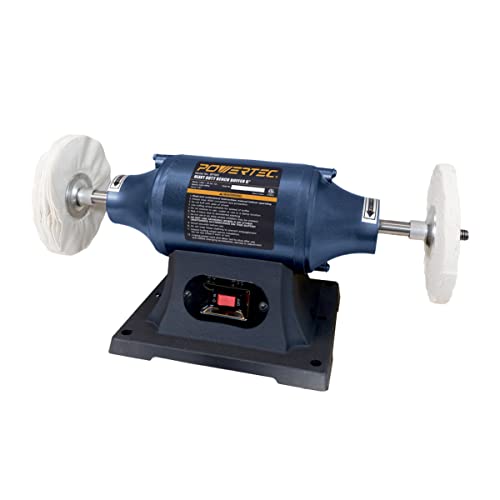 The POWERTEC BF600 is an outstanding benchtop buffer and the best model we were able to find for this product on the market today. This buffer is heavy enough to not need to be secured to a bench, so it can be a bit more mobile than some of its competitors.

But do not think that means the buffer itself easily moves while you are using it – far from it! It is sturdy enough to not move around at all while you are working on it.

And you can tackle a wide range of different objects when working with this buffer, thanks to the wide clearance it has between its wheel and its motor. This clearance makes it an excellent choice for working on items that need to be held at an angle or would otherwise take up more space when buffering. Users report that it is particularly awesome at polishing copper, silver, knife blades, and knife handles.

The POWERTEC BF600 is an amazing buffer that is definitely the market leader for its kind. Just know that it is not designed for hard grinding, so make sure to only use it for what it is intended for. 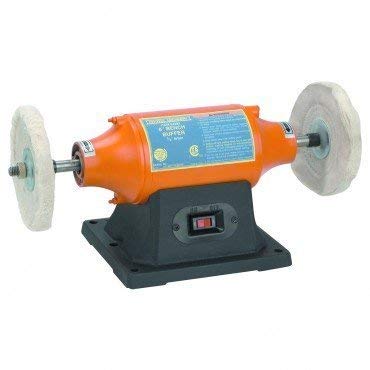 The Central Purchasing XtremepowerUS Benchtop Buffering comes in a close second place behind our first choice for a best overall benchtop buffer, the POWERTEC BF600. But do not think that just because this buffer is the runner-up that it is somehow not excellent in its own right!

This buffer is fantastic. It has a lot of space between the buffing pads and the body of the motor, so you will be able to buff a wide variety of different objects effectively, no matter what their size (one user reported using this machine to buff his hiking sticks!).

It comes with a heavy duty toggle switch to turn it on and off, so you will not have to worry about your kid accidentally turning it on and the resulting catastrophe. All in all, we recommend the Central Purchasing XtremepowerUS Benchtop Buffering!

The Central Purchasing XtremepowerUS Benchtop Buffering is an excellent buffer that is built to last. Just be forewarned that it can become extremely hot when it is being operated. 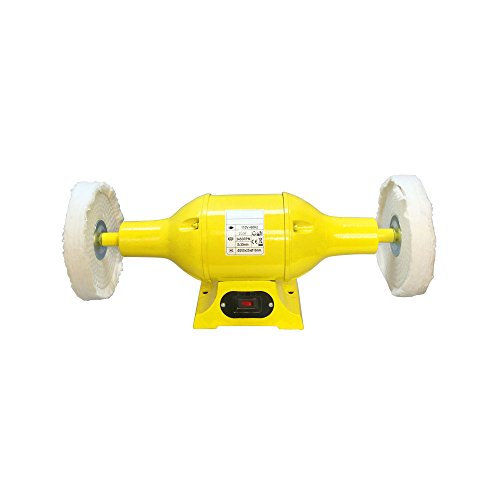 The HD 8” Long Shaft Benchtop Buffer Polisher Grinder is a versatile little unit that can accomplish pretty much anything you would ever want to get done in terms of projects. It has a much longer shaft than other models on this list, meaning it can give you good clearance for working with larger items and can therefore tackle larger surfaces with relative ease.

And, if you doubt that it has sufficient polishing abilities and grinding abilities, keep in mind that users report that it is excellent at both cleaning stains off of knife blades and at sharpening the actual knife blades themselves. Plus, it comes in a fun, bright, yellow orange color that will definitely bring some light and life to your workshop.

The HD 8” Long Shaft Benchtop Buffer Polisher Grinder is a top notch benchtop buffer that can do it all for you. Just know that you may have to teach yourself how to do it all, because its operating instructions really only detail how to use the grinding component. 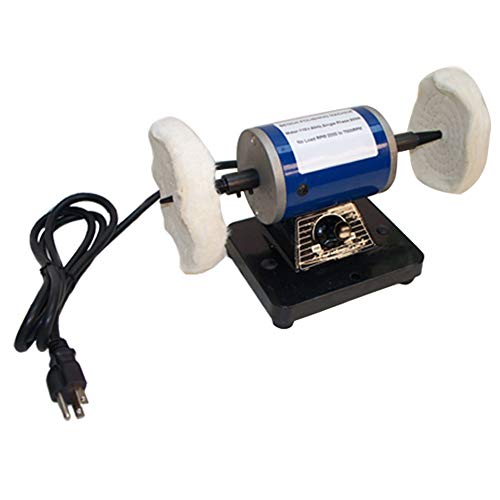 The Dual 4-1/4” Polisher Polishing Buffer is the buffer for you if you are primarily interested in a benchtop buffer that will help you get your old jewelry to reclaim its former shine. This buffer’s smaller size makes it ideal for polishing smaller items such as nice jewelry and hobby parts. Plus, it is easy and accessible for everyone to use, even for those with little to no buffer experience, because of its compact nature and ease of manipulation. It does not produce a large amount of vibration and is not overwhelming in nature.

It is also fairly versatile, thanks to its speed adjustment capabilities. When using it on lower speeds, it can be safely used to polish a variety of different surfaces, including those that are much softer than metal parts such as plastics and wood. And, it has an impressive amount of torque for its size.

The Dual 4-1/4” Polisher Polishing Buffer is a fantastic buffer that is particularly great at polishing smaller items. It can give off a pretty stinky chemical smell, though.

If you are interested in a high quality buffering option, but you do not have the funds to spend on some of the pricier models, you should go with the XtremepowerUS 8 inch ¾ HP Single Speed Benchtop Buffer. You do not have to worry about sacrificing any aspect of performance with this buffer, and you can get it for a steal of a price! This buffer is definitely a beast.

It operates at ¾ horsepower, which is certainly no joke, yet somehow does not require a ton of energy to operate. But do not think that means this machine is not powerful – quite the opposite! It can 100% pack a punch. It comes with an included flannel wheel and a cloth wheel, so you can get going right away on your next project the minute it arrives

The XtremepowerUS 8 inch ¾ HP Single Speed Benchtop Buffer is a fantastic buffer at an absolute steal of a price. Just know that it does not have as much room between its motor and wheels as some of the other options on this list.

Benchtop buffers can be a real game changer when it comes to improving the surfaces and the overall aesthetic of a wide variety of household items.

Make sure you take the time to think about what you would most like to accomplish with your benchtop buffer before purchasing, whether that is having some versatility or only working with objects of a specific size and material.

We absolutely guarantee that, if you go with any of the awesome items from this list, you will definitely not regret it. And you will likely enjoy polishing objects quite a bit more than you used to!